Picked up a fresh batch of library books after New Year's. You never know which ones will rise to the top of our bedtime requests. Here's what Nate (5) and Sophie (3) picked: 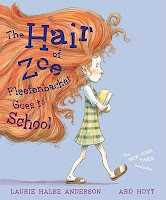 1. THE HAIR OF ZOE FLEEFENBACHER GOES TO SCHOOL
by Laurie Halse Anderson
I wasn't sure if Nate would go for this one, but when I read the title aloud for the first time, both kids literally screamed with laughter. A fun story with amazing illustrations of Zoe's whirling, swirling hair.

2. THE BOOK THAT EATS PEOPLE
by John Perry with illustrations by Mark Fearing
Okay, so I have to admit this title was recommended during a session at the SCBWI 2010 Fall Conference in Oakland, so I tracked it down. The kids were mesmerized, and Nate even requested I take the book out of his bedroom at night time. A nice blend of creepy and silly. 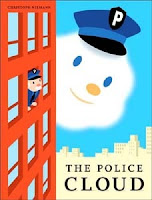 3. THE POLICE CLOUD
by Chrisoph Neimann
This sweet little tale of a cloud that wants to be a cop was an instant hit. Great bedtime book with fun, relaxing illustrations and a happy payoff at the end. The clean, computer illustrated style helps this book stand out from the rest.

4. THE MAGIC TREEHOUSE #5: NIGHT OF THE NINJAS
by Mary Pope Osborne
Suddenly, Nate's into ninjas. He was a Red Power Ranger for Halloween, but it really kicked in when Lego recently debuted their "Ninjago" series of "spinjitzu" legos. It just so happened that we had just finished the 4th Magic Treehouse book and when I revealed the 5th book title to Nate, he nearly fainted. Usually we spread these chapter books over a few days, reading one to three chapters a night. We read all 70 pages of Night of the Ninjas in a single sitting. 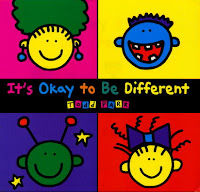 5. IT'S OKAY TO BE DIFFERENT
by Todd Parr
A positive message told in a unique and charming way. The kids totally gravitated toward Parr's vivid, childlike illustrations and loved the silly surprises like "It's okay to help a squirrel collect nuts." Just goes to show you can capture a kid's imagination with the simplest of imagery if it's done well.
Newer Post Older Post