1. ¡CORRE, PERRO. CORRE!
by P.D. Eastman
Our son Nate recently transferred into an English-Spanish duel immersion grade school. Very exciting stuff, and our whole family is jumping in with him. A bedtime favorite of ours has been P.D. Eastman's classic, Go, Dog. Go! My wife ran across the Spanish translated version, ¡Corre, Perro. Corre! and brought it home recently. Now, I never took Spanish, and I can't roll my R's to save my life. But, my wife did and can, so thankfully when she reads ¡Corre, Perro. Corre! it sounds really fun. I guess it's time to find Spanish versions of Where the Wild Things Are and Old Hat New Hat... 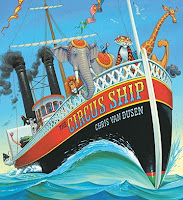 2. CIRCUS SHIP
by Chris Van Dusen
Circus Ship! Arrr, I'll curse this book til the day I die. It's just so well done, I wish I wrote it. Chris Van Dusen claims that it took him forever to create this enthralling picture book. Maybe so, but every stanza and every visual detail are so well executed, it was worth it. The story embellishes on a true-life tale of a ship in 1836 that sunk off the coast of Maine with circus animals aboard. Thankfully, in this version, the animals swim to shore and have some fun. The rhymes, pacing and story arc are just flawless and are matched by the vivid and hilarious illustrations. The kids love picking out their favorite animals and trying to find them in their various hiding places on the coastal island.

3. WE ARE IN A BOOK!
by Mo Willems
Mo Willems participated in a panel on humor at the SCBWI 2011 Winter Conference. If you've ever read We Are In A Book!, you'd understand why. This little picture book had attendees, including myself, laughing out loud in the conference bookstore. It seemed like an appropriate souvenir of my New York trip, so I brought home a copy to the kids. Man, what a hit. This book is genius and truly a funny read. My daughter insisted on taking it to her preschool so her teacher could read it to the class. Now the kids want me to bring home more adventures of Elephant and Piggie. Very funny, Mr. Willems. Very funny.
Newer Post Older Post