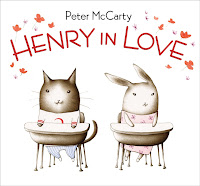 1. HENRY IN LOVE
by Peter McCarty
One of my critique group colleagues recently submitted a manuscript to the group that had a little romantic storyline in it. I was quick to say, "Watch out. Boys might not like the romance angle." I was speaking from experience. My 5 year old boy is going through a phase where we have to skip anything that involves, say, Princess Leia or the Fantastic Four's Invisible Woman. Girls are totally out. My colleague cited McCarty's Henry In Love, so I picked it up at the library to test Nate's reaction. He actually loved the book. And why not? It's charming from page one, and an early illustration of Henry waking up and going to the bathroom was a perfect ice breaker. Nate was hooked after that. I was too. 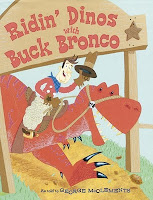 2. RIDIN' DINOS WITH BUCK BRONCO
by George McClements
Dino books are a no-brainer at our house. We include at least two in our monthly library batch. We've read a LOT of dino books. But the juxtaposition of dinos and Buck Bronco's cowboy slang was a fresh take that had the kids immediately giggling. There may be a million dinosaur books out there, but McClements' rootin'-tootin' how-to guide proves that there are always new possibilities for innovative story telling. 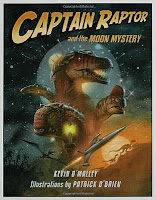 3. CAPTAIN RAPTOR AND THE MOON MYSTERY
by Kevin O'Malley with illustrations by Patrick O'Brien
Since we're on the topic of dino books, here's another one with a more galactic setting. Think Buck Rodgers if he was a Velociraptor, told in a comic book/graphic novel format, and you've got Captain Raptor. Nate's eyes nearly popped out when I showed him the cover. When read aloud as a bedtime picture book, this one requires a little more performance and special effects sounds. Luckily, I know exactly what a dinosaur's rocket engine sounds like, and can simulate the effects perfectly. Zzzzzzrrashhhh! 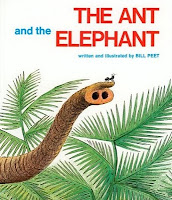 4. THE ANT AND THE ELEPHANT
by Bill Peet
Bill Peet was an illustrator and storyman at Walt Disney studios, working on such films as Cinderella, Pinocchio, Fantasia, Dumbo and Peter Pan among many other classics. After 27 years in movies, he wrote and illustrated over 30 children's books. Peet's 1972 classic The Ant and the Elephant caught my eye at the library, but I had a couple concerns. It's 46 pages long with quite a bit of text. Today's picture books are typically 32 pages and average word counts are shrinking by the minute. In this digital age of stunted attention spans, we tend to go for the quicker reads, but I wanted to see if this book could stand the test of time. I suggested to the kids that maybe we'd read half one night and then finish it the next. They flat out refused. They were enthralled from the get-go and never once grew tired of the story. By the end, the kids were recapping the tale and exclaiming about how mean the animals had been to the poor elephant. Great storytelling wins out, no matter the word count or the number of pages.
Newer Post Older Post