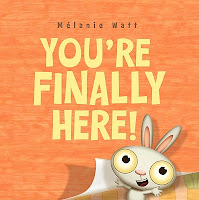 by Melanie Watt
The Mountain View Library has a shelf in the children's section dedicated to recent releases. I love that they offer this because it helps me keep up with newer titles, and I enjoy assembling our monthly book selection with a mix of classics and newer books. Best known for her Scaredy Squirrel

series, Melanie Watt's latest book was on the recent releases shelf, but became an instant classic in our house. This clever story breaks the 4th wall by having its only character--an emotionally needy little bunny--demanding to know where we, the readers, have been, and why we've been keeping him waiting so long. The gag never grows old and the kids insisted on a nightly reading for weeks. There's something especially engaging about characters that know they are somewhat trapped in the conventions of a book, i.e. Mo Willems' We Are In a Book!, that draws us in and makes us a part of the story.

FROG AND TOAD ARE FRIENDS

by Arnold Lobel
This Caldecott Award-winning masterpiece was published in 1970, just one year before I was born. (I'll save you the math. I turn 40 in October. Yikes.) Five or six years later, I was reading the Frog and Toad stories in grade school. I still have clear memories of those early reading experiences. So when it finally dawned on me that I could pass this series on to my own kids, I grabbed one of our library's several copies and gave it a read. Both kids were instantly entranced. I hadn't read the Frog and Toad stories in roughly 35 years, and I was entranced, too. Each story is such a perfect little package of simplicity, humor, and poignancy. The two friends' relationship is so charming and honest, and Lobel's illustrations are just plain funny. What my kids don't get, though, is the feeling of nostalgia that washes over me when I read aloud those short, familiar sentences. That, along with the rough, sketchy, hand-drawn illustrations colored in pale tones of brown and green sends me straight back to the 70's. It was a simpler time then. No cell phones. No cloud computing. No GPS. No Angry Birds. Books were just books. Star Wars was just Star Wars. And Spam only came from a can. Thirty-five years from now, I hope my kids will be able to faintly recall the summer of 2011, when Barack Obama was president, when no one lived on Mars, and when they first discovered the timeless adventures of Frog and Toad.
Newer Post Older Post