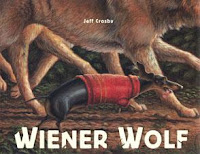 by Jeff Crosby
I met Jeff Crosby and his wife Shelley at the SCBWI Rocky Mountain Chapter's 2009 Fall Conference. It was my first SCBWI event and afterward I raced home to my wife to tell her I met a couple of people I thought we could actually be friends with! (We don't get out much.) I was very impressed with Jeff and Shelley. Among other projects, they had co-written and illustrated a published dog book called Little Lions, Bull Baiters & Hunting Hounds: A History of Dog Breeds

, which they had displayed in the lobby at the conference.

As I was flipping through Jeff's illustration portfolio between conference sessions, I noticed a quirky drawing of a bored looking dachshund sitting in the lap of a little old lady. As it happened, one of my earliest picture book manuscripts was called Angie and the Laptop, about a grumpy lap dog who becomes jealous of her owner's new laptop computer. Jeff and Shelley were clearly dog people, so after the conference, I sent them my dog manuscript as a friendly follow-up. Eventually, we formed a critique group and I'm happy to say that--even though we've moved to different states--the group is still going strong.

In one of our early critique group meetings, Jeff explained that his agent had been shopping around his book about a wiener dog. He showed us a couple early paintings and let us read the manuscript. Cut to this past Saturday. Wiener Wolf (Disney Hyperion, 2011) is in stores around the country! It's a beautiful book with a charming little hero. Jeff combines his dry wit with lush, naturalistic settings and it makes for a "there and back again" kind of adventure that any kid or adult could enjoy. Highly recommended.
Newer Post Older Post