And we're back. I suppose being "too busy to blog" is the goal, right? Well, I'm still very busy--we have a preschooler and a 1st grader now. Enough said. But after a short break after the SCBWI conference in LA, I'm revving up for lots more updates on Beetle and the Dungball, more book reviews, and hopefully some new content TBD. So, on with the show. 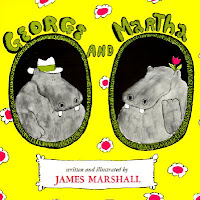 GEORGE AND MARTHA
by James Marshall
If you go to enough conferences you start to notice the same classics being referenced over and over. Where the Wild Things Are, Goodnight Moon, Madeline, Peter Rabbit, Corduroy, Curious George, Officer Buckle and Gloria... the list goes on. At the LA conference back in August, one modern classic I had never heard of was mentioned more than once: James Marshall's George and Martha

series. Where have I been all these years? These books are wonderful and my kids immediately recognized how fun they are. George and Martha are two hippos that are best friends. They act like an old married couple, though they live in separate houses. Each George and Martha book loosely hangs on a theme (honesty, for example), and the books are broken up into five mini-stories. It's a study in wit, brevity, simplicity, timing, humor, and character. I may have come late to the party, but I'm glad I finally got to meet George and Martha. BTW, there's also a 1999 animated TV series with Nathan Lane voicing George and Andrea Martin as Martha.

BENNY AND PENNY
by Geoffrey Hayes
Our 1st grader's reading is flourishing before our eyes. It's very exciting to sit by my son with a book he's never read and listen as he works his way through new words and gains confidence with every sentence. The trick is to give him books that are challenging, but not daunting. We throw a mix of easy readers and simple chapter books at him, but I recently found a hybrid that Nate likes a lot. Geoffrey Hayes' Benny and Penny

books are easy readers about a mouse brother and sister, presented in a comic book format. Hayes calls them "toon books". All the dialogue is done in speech bubbles, which is fun for Nate because he can voice the characters and get into the emotional drama without trudging through descriptions of the action. It's a refreshing break from his other books, and a nice introduction to comic books and graphic novels. I'm now on the lookout for more "toon book" series. (It's gonna be a few years before I pass on my mint condition Spider-Man and X-Men comics to my grimy-fingered boy.) 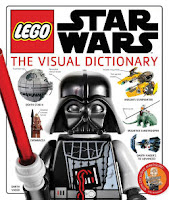 LEGO STAR WARS: THE VISUAL DICTIONARY
by Simon Beecroft
2011 is the Year of Star Wars at our house. Over the summer, both kids watched the original trilogy for the first time, Nate went to Lego Star Wars camp at the Mountain View rec center, and for Halloween, Nate plans to go as Boba Fett, while Sophie will be Darth Vader. I couldn't be happier. When Nate has a Star Wars question (and he has a lot) I'm his go-to guy. But his obsession has been the Lego Star Wars Visual Dictionary

. As a kid, I spent hours staring at the Sears Christmas Wish Book catalog. Nate absorbs his Lego Star Wars book with wide eyes filled with wonder. It's his two passions brilliantly and cleverly mashed together into one ridiculously detailed reference book. (Did you know that the Chewbacca minifigure is brown in the Imperial AT-ST set, the Millennium Falcon set and the Star Wars #3 minifigure pack, BUT, in several Imperial-era sets such as the Death Star and X-Wing Fighter sets, Chewbacca is reddish-brown?) It may not be a classic picture book or an enriching easy reader, but it gets the kid excited about pouring over pages and concentrating on tiny details. It's a really fun book, by golly, and I'm glad he likes it.
Newer Post Older Post