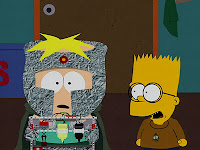 As we reach the half-way point of PiBoIdMo, I recall one of my college professors boldly proclaiming that there had not been an original idea since the 1930s. According to him, after that golden era, every story, every image, every note of music can be traced back to an earlier, trailblazing creator and their work. All we can hope to do now is infuse our own fresh twist to the stories, conflicts and dramatic arcs that were conceived long ago.

Along that same line, there's a great episode of South Park where the character Butters is planning revenge on his friends. But after presenting his best idea, his nerdy neighbor replies, "Simpsons did it." No matter how original Butters tries to be, every one of his new ideas was already thought up and performed to perfection on The Simpsons TV show--and it drives him crazy. I feel Butters' pain.

Whenever I'm brainstorming and come upon a snappy title that screams "Story potential!" and "Marketing gold!" my very next step is to head straight to Amazon.com and see who already came up with it. It saves me the agony of falling in love with a title or toiling over a story only to find out someone basically already wrote it. The best scenario is when those seven lucky words pop up: "Your search did not match any products." Then, of course, I do a wider sweep on Google just to be sure. It's not very scientific, but at least it gives me hope that I'm not inadvertently rehashing someone else's work. After all, even if my professor was right, even if we are doomed to never truly create an original idea, all we can do is strive to be as fresh and original as possible. Sure, there are billions of bedtime stories out there. The trick is to write a bedtime story that surprises, one way or another.

Then there are parodies and modern retellings to consider. Many wonderful picture books out there use twists on classic fairy tales and such, like Jon Scieszka's The True Story of the Three Little Pigs, or more recently, Goodnight Goon by Michael Rex and Goodnight iPad by Ann Droyd (Get it? Android?), both very funny parodies of Goodnight Moon.

Poor Butters. He didn't know he was being so unoriginal. In his mind, his ideas were his own--until his hopes were dashed. Maybe ignorance is bliss. But if someone else has already written a rhyming story about a grumpy green guy who hates Christmas, please let me know.