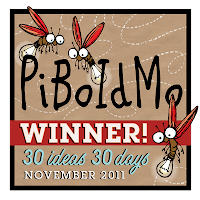 I had an idea last night: "I'll write a poem about ideas." So I did.

Ideas are out there. They want to be found.
Look high in the sky. Dig deep underground.
Ideas are easy. You just have to think.
The hard part is finding the ones that don't stink.

A few might be perfect. While others might not.
They could be alone. Or there may be a lot.
This one is silly. That one is great.
Here's one that's nice, but a little too late.

Ideas for poems, ideas for books.
Ideas for builders and painters and cooks.
Ideas can change the whole world in a day.
Or take years of trying for someone to say.

They rattle around in our hearts and our heads.
We keep them in journals tucked under our beds.
And once in a while, when the timing is right,
Maybe early one morning, or late in the night...

You have an idea that feels like "The One."
It's simple and crazy, fantastic and fun.
The greatest idea you'll ever conceive!
How quickly it came is quite hard to believe.

And once you calm down, here's a question or two:
So what happens next? Now what do you do?
Go write it. Go sing it. Go teach it. Go fly it.
Go bake it. Go build it. Go for it. Just try it.

Your super idea could be a success.
It might be a flop. It's anyone's guess.
Ideas are only the first step of many.
Ideas are magic. So... do you have any?


It's been a great month of brainstorms. I met my projected goal of 100, and now I'm very excited to get cracking on some of them. Special thanks again to Tara Lazar, who had the excellent idea of PiBoIdMo. See you next November!
Newer Post Older Post