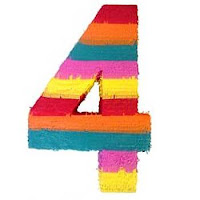 It's been a productive 2012 so far! Julie Hedlund's 12x12in'12 challenge has provided the perfect catalyst to bust out a steady assembly line of work between now and December. Mark me down for FOUR new first drafts, baby. My current pace is one story a week. I hope to sustain that level throughout the year.

It kind of feels like the ol' grad school days. Every week we'd write new songs and new stories in new styles with new collaborators for new characters in new situations. Every week, a new assignment with new challenges. We became fast writers and even faster re-writers. It was exciting and exhausting. There was little time to judge the work before it was finished--or performed on stage in front of live audiences! It's in that spirit that I hope to enter each week this year with fresh eyes and an open mind as I write each new picture book manuscript. And, only seven days to do it before I'm off to yet another story.

Granted, they won't all be peaches. But, how do you know unless you actually write them? That's the point. I want to give all those PiBoIdMo ideas a fighting chance, the benefit of a first draft, before casting them off as "bad ideas" or worse, "ideas I never got around to working on." And, you can't write a second draft until you've written the first. Whoa, that's deep. Some weeks will be logistically easier than others (I do have two kids). And some ideas will be creatively easier than others. But every week, I hope, will result in stronger writing, surprising twists, and a growing portfolio of pre-published work.
Newer Post Older Post