PB Writing in the Tablet Age

Over the past year or so I've gained a few gadgets and apps that have become essential parts of my writing process. I don't know if this will be helpful to anyone, but what the heck. By the way, I'm a Mac guy, so I mention Apple products below. But if your a PC, don't fret. There are PC/Android/Etc. versions available, too. If you have an app or gadget that makes being a children's writer easier, please share in the comments!

YES, YOU CAN WRITE STORIES ON AN IPAD... 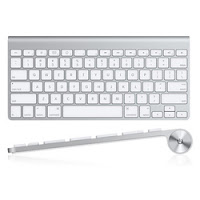 Step 1. Apple's wireless keyboard
As much as I really wanted to use my iPad 2's touchscreen interface to WRITE my stories, it just wasn't working for me. The onscreen keyboard is too small and typing anything longer than a quick email reply is a mushy, uncomfortable, error-prone affair. But I didn't want to go out and buy a $1,200 MacBook Air (though it was tempting) just so I could type up Word documents on it. Enter Apple's wireless keyboard. At first, it seemed silly to buy a keyboard for a device that's all about NOT using a keyboard, but I am way over it now. It's actually a great companion to the iPad and effectively converts my tablet into a laptop. On those nights when I'd rather sit and write at the kitchen table instead of going to the desktop computer in my office, I just grab my keyboard, set it in front of the iPad, and go! In fact, the combination of real keyboard typing and being able to grab the screen for highlighting text or jumping to another app is fun and smooth. 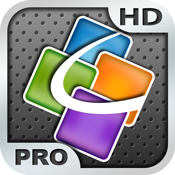 Step 2. QuickOffice Pro HD and Dropbox
Microsoft Word for iPad doesn't exist. But the next best thing is QuickOffice Pro HD. This $20 app is basically a lite version of the Office Suite. There aren't a ton of formatting options, but what I love about it is the ability to access and edit on my iPad the existing Word docs of manuscripts that I've saved on Dropbox from my iMac. Or, I can create a document in QuickOffice on my iPad, save and close, then reopen the doc in Word elsewhere. And speaking of Dropbox, if you're not backing up your manuscript files on the Cloud, people, you're just asking for trouble. Go get a free Dropbox account, drag your "Story Manuscripts" folder from your desktop or laptop into Dropbox, and live free knowing that should some disaster occur, your files are safe (and accessible) in the Cloud. 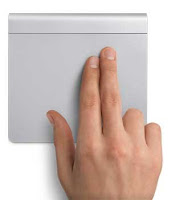 GET THAT MOUSE OUT OF THE HOUSE

Apple's Magic Trackpad
Last summer I cut the cord. The mouse cord. Like discarding some burdensome, vestigial tail, I evolved into a mouseless world, and I will never return. It all started with a nasty bout of carpal tunnel in my right arm. Using the mouse on my desktop computer was extremely painful. There had to be another way. There was. Apple's Magic Trackpad is just an oversized version of what you'd get on a MacBook. But you can set it anywhere on your desk, and the multi-finger swipes make screen navigation quicker and easier than with a mouse. After a few minutes of practice, it becomes second nature. America! Throw away your mice! Convert to a trackpad and join the evolution.

Ideas are everything. They are the seeds of great stories. So, I am surrounded and well armed with ways to ensnare those ideas before they might disappear.

Siri for iPhone 4S is great for taking a note on the go. Just say, "Take a note. Research North American dung beetles" and she'll make a digital note that automatically syncs with my iPad.

Evernote is a robust app that also syncs across all devices. If, like me, you have multiple running lists, Evernote organizes them nicely.

I took handwritten notes during my last two SCBWI conferences using a stylus and an app on my iPad called Notes Plus. It takes some getting used to, and sometimes putting pen to paper is just quicker and easier, but the beauty of taking notes digitally is having them organized and readily accessible, rather than being lost in some random spiral notebook that I can't find because it's buried under all those other random spiral notebooks. Notes Plus also syncs to Dropbox, so your precious notes will have an extra level of backup.

I don't buy all my books through Amazon, but I keep a running tab of the ones I want or need to check out in my Amazon Wish List. If someone mentions a good book, I can quickly find it in my Amazon app and add it to my Wish List for investigating later. Plus, I've made great discoveries through the "Customers Also Bought..." list they provide for each book. 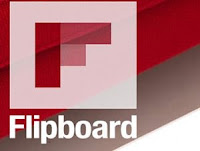 KEEP UP WITH THE BLOGOSPHERE

Is it just me, or are there WAY too many children's writer blogs out there to follow? It's ridiculous. Tag that onto Facebook, Twitter and now Google+ (which I still can't figure out what to do with) and you could spend hours a day trying to keep up with it all. I guess some people do. I'm sorry, but I can't stand visiting Facebook. It gives me a stomach ache to look at my "Wall" and the menagerie of quips and kid photos that pass through my "News Feed". And Twitter just makes me dizzy. (Dude, I sound like a grumpy old man.) Seriously, for a long time I had accounts and avoided them like the plague.

Then the Flipboard app for iPad came along and put all those posts into a pretty magazine format. I don't know why, but it makes a huge difference. It just feels less oppressive and I can scan and flip past the stuff I'm not interested in more efficiently.

For finding, subscribing and following the ever-growing list of bloggers out there, I couldn't do without Google Reader on my iPhone. When I'm waiting to pick up Nate at school or sitting in the Jiffy Lube lobby, I can pop open Reader and scan all the children's writer blogs I keep tabs on without ever having to physically visit their sites. It's like having a personal assistant read me only the interesting parts of the morning paper.


So that's it. Technology. Love it or leave it. When we find a bit of tech that makes life easier, we always say "Man, how did I ever get along without this before?" The answer is, you got along just fine. But if you're an aspiring kids writer like me, still working toward that first publishing deal, keeping up with the industry and hearing the stories and advice from other writers is extremely valuable. Long live the Internet! In the Age of the Tablet, it doesn't matter how you tell your stories or get your information. What matters is that you're telling them, and you're getting it.