Kings. Will they ever learn? They're always so full of themselves. They're greedy and power hungry and completely out of touch with regular folks. Someone ought to knock 'em down a peg or two. From King Midas to King Yertle, kings and picture books have always gone together like milk and cereal. So it didn't come as much of a surprise when two of our recent library picks centered on--you guessed it--kings. 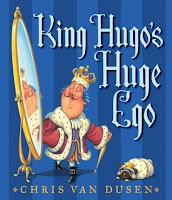 KING HUGO'S HUGE EGO
by Chris Van Dusen
As a picture book writer who rhymes when the story calls for it, I have a huge appreciation for Chris Van Dusen's work. I reviewed his excellent rhyming book, The Circus Ship, a year ago in my February 2011 blog, and I was glad to see he's still hitting it out of the park with King Hugo. This squat little tyrant has a big head. Literally, a big head. After offending a local witch, she puts a curse on the king. And so, his head expands outwardly every time he compliments himself. Of course, the illustrations of the king's two-foot tall body with a six-foot wide head are hysterical, and Van Dusen's tight rhyme schemes make this royal romp a pleasure to read with the kids.

MUSTACHE!
by Mac Barnett, illustrations by Kevin Cornell
Mustaches are just naturally funny. But vengefully targeted mustaches are even funnier. King Duncan continually neglects the needs of his citizens in favor of statues and billboards celebrating his handsome features. But when the villagers and his staff start defacing all his "I'm Great!" banners with ridiculous mustaches, the king can't take the joke. Eventually, Duncan learns to laugh at himself, but not until he's thrown his entire kingdom in jail. This witty twist on a king's emotional journey is full of snort-inducing humor for the parents, and every spread is littered with comical details for the kids to plunder. 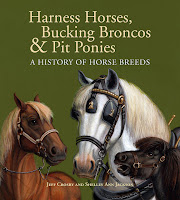 HARNESS HORSES, BUCKING BRONCOS & PIT PONIES: A History of Horse Breeds
by Jeff Crosby and Shelley Ann Jackson
A horse! A horse! My kingdom for a horse! (How's that for a segue?) My almost-5-year-old daughter, Sophie, is a horse fanatic. The girl is obsessed. I buy her a toy and she says, "But daddy, this isn't a horse." I read her a book and she says, "But daddy, there aren't any horses in this book." I think it all started at a birthday party for my friends Jeff Crosby and Shelley Ann Jackson's daughter Harper a couple years ago. Not only were there live pony rides, but Harper also had a disturbingly life-like animatronic pony that ate plastic carrots. Sophie's passion was sparked. So, it seems fitting that Jeff and Shelley's beautifully written and illustrated horse book has become a nightly ritual for us. Sophie points at all the horses she loves (All of them, except the Clydesdales. She doesn't like their fuzzy ankles for some reason.) and I just nod and agree with her. But, you don't have to be a horse lover to appreciate Harness Horses. Horses have played crucial roles in world and cultural history. Their story is our story, and each breed offers a fascinating look at how we've lived and worked together over thousands of years. And if you're more of a dog person, well you're in luck. Harness Horses is actually the follow-up to their equally remarkable dog book, Little Lions, Bull Baiters & Hunting Hounds: A History of Dog Breeds. To learn how this amazing husband and wife team work together to produce such great books, read this interview over at Donna Bowman Bratton's blog.
Newer Post Older Post