I guess I'm a word nerd. I love wordplay like palindromes and anagrams. There are several books out there about intricate letterplay and manipulations of the alphabet, but I remember having my mind blown when someone gave me a copy of Making the Alphabet Dance by Ross Eckler. From acrostic poems to novels written without the letter e and chain link sentences where the last letter of each word matches the first letter of the following word, it's simply amazing what people can do with language.

This week, we happened to pick up a couple picture books that have fun with letters. The kids and I marveled at their cleverness...

CAVEMAN: A B.C. STORY
by Janee Trasler
This is one of the coolest ABC books I've come across in a long time. It's a funny little tale of a caveman and a group of prehistoric animals who become friends. But as the illustrations progress, each page just contains one word, and each word comes alphabetically. So, the story begins: Acorn... Bear... Cave... Dinosaur... Eat... Faint... Good-bye... Help! "Do you see?" I ask the kids. "See how each word comes alphabetically?" Then I tried explaining the awesomeness of Trasler's subtitle, "A B.C. Story." Okay, maybe they were less impressed than I was, but they loved the book anyway. 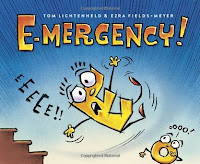 E-MERGENCY!
By Tom Lichtenheld and Ezra Fields-Meyer, illustrated by Tom Lichtenheld
From Alphabet Adventure to AlphaOops! The Day Z Went First, there's no shortage of examples where letters have been anthropomorphized in children's books. But E-Mergency! takes the prize for the most wordplay, puns and visual gags. When the letter E gets knocked out of commission for a while, O has to take her place. Anarchy ensues as signage around the world has to substitute all E's for O's. The kids roared at all the silly changes: "Spolling Tost Today!", "Ico Croam!" and "Got Woll Soon!" to name a few. Nate also loved the subtler tricks, like the letters D and C are sent to Washington to alert the government. And the letter P always has to go to the bathroom. Every page is overflowing with gags and wordplay, giving this "e-book" (yuk-yuk) plenty of re-readability. 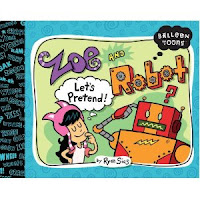 ZOE AND ROBOT: LET'S PRETEND!
by Ryan Sias
Clearly, wordplay takes imagination, but if you're a robot, you might be in trouble. As Robot dryly puts it, "Zoe, Robot is a robot. Robots do not know how to pretend." In this charming comic book-style easy reader from indie publisher Blue Apple Books, Zoe tries to teach Robot that a pile of pillows can be a mountain for climbing--if you just pretend. It's a hysterical back and forth that had Nate in stitches. He absolutely insisted that we return to the first page and immediately read it all over again. That doesn't happen very often. Lucky for Nate, I might have enjoyed this little book even more than he did. And the next day, Nate took all the pillows in our house and piled them up in the living room.
Newer Post Older Post