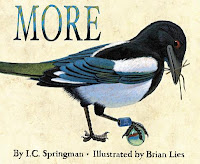 MORE
by I.C. Springman, illustrated by Brian Lies
With 5 and 7 year old kids, our family is constantly acquiring mounds of legos, action figures, trading cards, sticker books, stuffed horses and wads of oddly-shaped rubber bands. It's an ongoing battle to keep our closets from bursting with the clutter of things we "need." I'll admit, I've sometimes had a hard time letting go of sentimental objects, but moving across the country over the course of 7 years has forced me to whittle down my accordion and cassette tape collections to the bare essentials. So when I happened upon More recently, I instantly felt a kindred spirit with the book's central character, a hoarding magpie who just can't seem to let his possessions go. Illustrated in great detail by Brian Lies of those Bat books fame (Bats at the Beach, Bats at the Library) the bird's nests full of trinkets and junk seem to call little fingers to point and grab them up. There are new treasures to discover in every reading. But what impressed me so much was how such a fun little fable could be told in a mere 45 words. In this case, less is definitely more, as Springman's simple yet provocative choices connect playfully with the images.
And despite the book's timely message, I'll close the cover and the kids will still say, "More!" 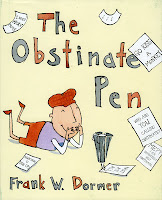 THE OBSTINATE PEN
by Frank W. Dormer
Now and then I'll buzz down to the local book shop just to check out a newly released book that I stumbled upon through a tweet or blogpost. It's strangely satisfying to make the transition from digital discovery to physically holding the book in my hands within days of its publication. But what's almost more fun, is once I've made the trip and satisfied my curiosity, I then unearth some other book on the shelf that comes as a complete and delightful surprise. Such was the case with The Obstinate Pen. I didn't go looking for this book--it found me! And I knew the kids would love it the minute I shared it with them. The pen in question is, yes, obstinate. When Mrs. Pigeon-Smythe sits down to write her memoir, what actually ends up on the paper reads: "Mrs. Floofy Pants has a spoon up her nose!" As the precocious pen passes from owner to owner refusing to write what is asked of it, we can only wonder, "What does the pen want?" The answer is a sweet little surprise at the end. But you'll have to discover it yourself by going down to your local bookseller like I did. It's worth it. Go on. I'll wait. 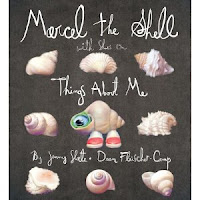 MARCEL THE SHELL WITH SHOES ON: THINGS ABOUT ME
by Jenny Slate and Dean Fleischer-Camp, illustrated by Amy Lind
Marcel the Shell was another digital discovery that drew me to the bookstore. Marcel made headlines back in 2010 when Jenny Slate (a former SNL cast member) and Fleisher-Camp made a stop-motion animated short about a squeaky voiced shell being interviewed around their house. It was shown at the Sundance Film Festival among others. Long story short, if you haven't already, you can watch the 3-minute video on YouTube here and add to their nearly 18,000,000 views. At some point (maybe after their 9 millionth hit), somebody said, "Hey, we could turn this into a picture book." And so they did. Now, Marcel is very cute and lovable, but a big part of his charm is due to Jenny Slate's funny vocalizations and phrasing. So, I decided to do a little experiment. Before showing my kids the video, I read them the book. They had no idea who Marcel the Shell was except as a picture book character. Did the hard copy hold up? Yes. Yes it did. It's such a quirky, random story with an unlikely hero, that the kids were immediately spellbound by Marcel. I still haven't shown them the video yet. But when I do, I'm sure they'll love it. Or will they? Stay tuned.
Newer Post Older Post