MISS DAISY IS CRAZY!
by Dan Gutman with pictures by Jim Paillot
Over the past school year while Nate was in 1st grade, I volunteered as a book shelver for the school's library. It was a great experience, though for someone like me with a bad lower back and wonky knees, I learned that being a librarian requires great physical strength and stamina. Those lower shelves are killers. One day I asked our librarian which book series were her most popular. She immediately pointed to the shelf stuffed with well-worn paperbacks by Dan Gutman. I was surprised at first. They are all stories about kids in school, which is exactly the opposite of what I'd assume kids who are in school would want to read about. But with titles in Gutman's "My Weird School" series like Miss Daisy is Crazy!, Mr. Klutz is Nuts!, and Mrs. Roopy is Loopy!, you quickly begin to realize that Mr. Gutman is hitting that humor sweet spot for kids just like my boy. A.J., the story's protagonist, is a 2nd grader who claims he hates school, but whether he knows it or not, seems to be enjoying it anyway. When A.J. and his friends hatch a plan to buy the school and convert it into a video game arcade, the students and the school faculty come up with a satisfying compromize that had Nate's imagination spinning. Nate and I traded off reading Miss Daisy is Crazy! aloud together and had a blast. He's very close to being able to read these books on his own, but until then, I'm glad we get to enjoy them together.

POKÉMON DIAMOND AND PEARL ADVENTURE! #4
story and art by Shigekatsu Ihara
First it was Thomas. Then it was dinosaurs. Then it was Hotwheels. Then it was Gormitis. Then it was Bakugan. Then it was Wolverine. Then it was Iron Man. Then it was Legos. Then it was Star Wars. Then it was Lego Star Wars. Then it was Angry Birds. Then it was Mario. Then it was Sonic. Then it was Ninjago. Then it was Skylanders. And now... it's Pokémon. Nate is living and breathing the whole enduring Pokémon phenomenon. It's his latest passion. And while I'm sure it will eventually fade away for whatever the next thing is 2nd grade boys obsess about, right now it's his whole world. He tells me on a daily basis, "I wish Pokémon were real." Well, in my book, they are very real. Real collecting cards, real sticker books, real tv episodes and movies, real action figures--and as the saying goes, Nate wants to "catch 'em all." So, of course, our public library carries a wide assortment of Poké-lit. From leveled readers and how-to-draw Pokémon books to biographies on Pokémon creator Satoshi Tajiri. But the most interesting are the manga-style graphic novels, such as the pictured Diamond and Pearl Adventure. When you open the cover, you're hit with a warning: "Hey! You're Reading in the Wrong Direction!" Since these tales were originally told in Japanese, they read right to left. To preserve the original orientation of the art, the book starts from the right cover and works left. Try reading one of these aloud at bedtime. It takes practice! Okay, so the stories might as well be in Japanese because most of the plot and dialogue are tough to decipher. But that so clearly doesn't matter, especially to the kids. Pokémon is about collecting and friendship and magic and adventure and monster pets that fit in your pocket. Sounds fun, right? If it's Nate's passion, then it's my pleasure. 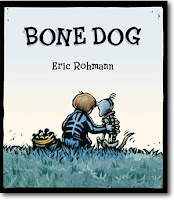 BONE DOG
by Eric Rohmann
Zombies and the undead are everywhere these days--and picture books are no exception. Be sure to check out the very funny Zombie in Love by Kelly DiPuccio and Scott Campbell. During the previews for Brave last week, our kids caught a glimpse of Tim Burton's animated feature, Frankenweenie (coming out in October 2012), about a boy who reincarnates his dead dog. In typical Tim Burton fashion, it looks dark and grim and creepy in a good way. But... "Too scary!" said Nate. So, when I found Bone Dog on the New Books shelf at the library recently, I was interested to see how the kids would feel about it. Rohmann masterfully balances his playful illustrations and touching theme of death and loss with a rather macabre tale of a lonely boy who is saved by his dead dog from a band of flesh-eating skeletons on Halloween night. At first glance, I might say "Too scary!" But with Mr. Rohmann, Caldecott winner for My Friend Rabbit, we are in very safe hands. Bone Dog is all at once creepy, funny, suspenseful, heartbreaking and hopeful. The kids loved the story and the book sparked a meaningful discussion of pets' life-spans versus our own. If Nate and Sophie ever decide down the road that Frankenweenie isn't too scary to watch, I'll be interested to see if that movie can come close to striking the same wonderfully haunting notes as Bone Dog.
Newer Post Older Post