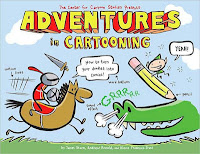 ADVENTURES IN CARTOONING:
How To Turn Your Doodles Into Comics!
by James Sturm, Andrew Arnold and Alexis Frederick-Frost

Hands down, the biggest book discovery of the summer at our house was Adventures in Cartooning. Five pages into our first reading, Nate stopped me. "I love this book already," he said with bright, wide eyes. "You know why? It's funny--AND I'm learning about cartooning!" That pretty much sums it up. Told in a comic book format, a young princess who says she can't draw well enough to make a comic is met by an enthusiastic little elf. With a stockpile of simple doodle shapes, the elf leads the princess through an adventure involving a brave knight, a not so brave horse, a dragon, a whale and a patch of talking vegetables. Throughout the tale, the elf sprinkles in a light course in cartooning mechanics, using various types of panels, word bubbles, thought balloons and text sizes. By the final pages, the action takes over and all the tricks of the cartooning trade are put to hilarious use.

As explained in the liner notes, the book grew out of an assignment given by James Sturm at the Center for Cartoon Studies using Ed Emberly's book, Make a World, as inspiration. Frederick-Frost and Arnold were students in the school's very first class. Adventures in Cartooning also won the 2010 Gryphon Award for Children's Literature. If only there were more books like this! Well actually there are. Adventures in Cartooning has spawned an activity book and a Christmas special. Ooh, I just had a thought balloon: Stocking stuffers.