PiBoIdMo: More Than A Bunch of Ideas 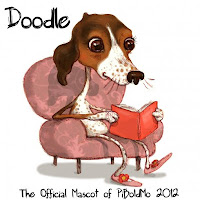 A year ago, I joined Tara Lazar's PiBoIdMo (Picture Book Idea Month) challenge simply to motivate myself to generate some new ideas. And it worked. During November, I amassed a list of about 100 ideas (the goal was 30). Some that were great, some good, and some that stunk like a pile of zombie catfish. But they were all new ideas for me, and it was a great exercise.

No one made me join PiBoIdMo. It's not a requirement enforced by the kidlit police. It simply served as a springboard to make something happen for this, as they say, "pre-published" writer. What I didn't realize is that it would kick off a year-long chain of events...


1. If I hadn't joined PiBoIdMo, I probably wouldn't have heard of Julie Hedlund's 12x12 in '12 challenge. Thanks to 12x12, I have 20 completed first drafts of PiBoIdMo ideas, some of which have gone on to 2nd and 3rd drafts.

2. If I hadn't joined 12x12 in '12, then I probably wouldn't have heard Julie's interview on Katie Davis's Brain Burps About Books podcast.

3. If I hadn't subscribed to Katie's podcast, I probably wouldn't have felt compelled to write her a jingle to celebrate her 100th episode--which she now uses as the show opening theme song!

4. If I hadn't written a comment responding to Mira Reisberg's guest post on the 12x12 blog, I wouldn't have won a free skype critique with Mira.

5. If I hadn't gotten Mira's critique, one of my 12x12 manuscripts--which began as a PiBoIdMo idea, of course--wouldn't be as strong as it is now. That manuscript, along with two other PiBoIdMo/12x12 stories, is currently being considered by an agent!

6. And if I hadn't joined PiBoIdMo, which led me to join 12x12, which led to all that other great stuff, I wouldn't be currently composing and performing the sing-along song version of Julie Hedlund's text for her upcoming storybook app, A Troop is a Group of Monkeys! (Coming in December from Little Bahalia Publishing.)

So, if you're lacking in fresh picture book ideas and need a kick in the pants, then take the PiBoIdMo challenge. Just be prepared. You're going to meet a whole community of fun, supportive, like-minded writers. You'll surely discover stories you didn't know you had in you. And when it's all over, that shiny new stack of picture book ideas just might lead you on a path to possibilities you never imagined.
Newer Post Older Post