There and Back Again: One Dad's Repeat Visits to Middle Earth 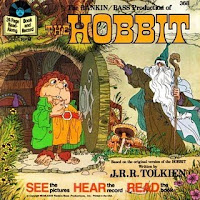 In 2001, I saw Peter Jackson's film adaptation of J.R.R. Tolkein's The Fellowship of the Ring with my wife in New York City. I can still remember the moment at the beginning when Gandalf drives his little cart up the hill to Bilbo's door at Bag End. I never talk in theaters, but I turned to Trudi then and whispered, "I already LOVE this movie." Eleven years later, I'm anxiously awaiting the premiere of the first installment of The Hobbit trilogy on December 14.

My first exposure to The Hobbit as a kid was the Rankin/Bass 1977 animated TV special. (Andy Serkis and Ian McKellen are great, but for me Gollum will always have the gravelly voice of Brother Theodore and Gandalf will always sound like John Huston.) I also had a book and vinyl record set that I listened to over and over again with those giant 1970's padded headphones over my ears. I probably first read the actual book of The Hobbit in 6th or 7th grade. Little did I know back then that some day I would read Tolkein's tale of dwarves, halflings, wizards and a big red dragon to my own son. 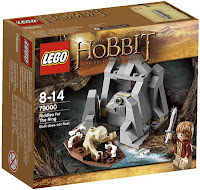 Nate is seven now and his first exposure to Middle Earth was through Lego's Lord of the Rings building sets. Ah, times have changed. But over the summer, I started reading him The Hobbit at bedtime and it was such fun. We'd only get through two or three pages in a night, but Nate loved it--partly because, I'm sure, he could tell I was loving it. Much of the fun was catching him up on all the lore of Middle Earth as we went along, and trying to explain how the events of The Hobbit happened BEFORE Frodo takes the ring to Mordor. Prequels and preludes are slightly confusing to a second grader. We still call Star Wars Episode IV "episode one" and Episode III "episode six".

At Nate's request, we've now moved on to the daunting task of my reading aloud The Lord of the Rings to him at bedtime. And really, it's no trouble at all. I am happy to return to the Shire at the drop of a hat and will gladly lead my kids through the Mines of Moria, 'round Minas Tirith, down Shelob's lair and into the Cracks of Doom. Along the way, I'll have to stop at the local movieplex and see The Hobbit: An Unexpected Journey. Too scary for the kids, but just right for me... I hope.
Newer Post Older Post