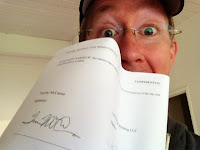 Howdy folks. I am supremely happy to announce that I have landed my very first publishing deal! I've been holding my tongue for weeks, but now that the ink is dry, it's finally official. Little Bahalia Publishing has acquired my story book app, Teeny Tiny Trucks, a rhyming adventure that follows a convoy of micro-sized big rigs through a treacherous garden and beyond. How fun will that be as an interactive story app?! Oh, and it's slated for release sometime this summer. Good heavens... Did he say THIS summer? Yes, dear, I believe he did.

Of course, you'll recognize the name Little Bahalia because it is the same Little Bahalia that published Julie Hedlund's A Troop is a Group of Monkeys. Contributing music and narration for Troop was a complete delight, and I'm thrilled that Teeny Tiny Trucks will be in such talented and capable hands. We'll be making an illustrator announcement very soon, I hope.

The road to this mile marker was long and winding. Teeny Tiny Trucks only could have reached such a scenic overlook through a series of SCBWI conferences, online writing challenges, kidlit jingles, volunteer work, personal connections, networking, an unrelated skype critique, and a very handy app proposal template. And yes, there were plenty of potholes and speed traps along the way. Like a trucker on NoDoz, I could go on and on, but I'm going to save the whole story for it's own post in the near future (with lots more trucking metaphors), so keep yer ears on good buddies. Yee-haw! Over and out.
Newer Post Older Post