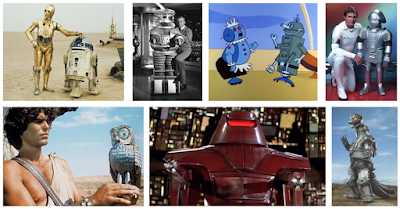 My childhood was filled with robots from TV and film: R2-D2 and C-3PO from Star Wars, Twiggy from Buck Rogers in the 25th Century, Maximilian from The Black Hole, Bubo from Clash of the Titans, Rosey from The Jetsons, B-9 from Lost in Space, and Mechagodzilla from Godzilla vs. Mechagodzilla rounded out the all-stars.

So naturally, when I first started writing books for kids, one of my earliest manuscripts was a rhyming robot picture book. Five years later, Bitty Bot (gloriously illustrated by Tad Carpenter) will be published by Simon & Schuster / Paula Wiseman Books in October 2016. Two other robot books for kids are coming out this year as well. Peter Brown's middle grade novel, The Wild Robot, releases in April, and Miranda Paul's Trainbots, with illustrations by Shane McG releases in June.

That got me thinking about all the bots from books that preceded ours--the Tik-Toks, Robot Zots, and Iron Giants of the world. And boy, are there a lot. Until now, all those robot books have been scattered willy-nilly across the internet. Well, I'm pleased to announce the launch of READ ABOUT ROBOTS, a new website celebrating 150 years of robot books. That's right, people were writing books about steam-powered metal men back in the 1800s! Along with a growing chronological gallery of over 100 robot book covers, we'll have monthly articles, interviews, a robot drawing contest for kids, and more. Plus, on October 11th, we're celebrating Read About Robots Day. Stay tuned!

You can dive into this amazing world of literary robots at http://readaboutrobots.tumblr.com/. And be sure to Like us on Facebook at https://www.facebook.com/readaboutrobots/.