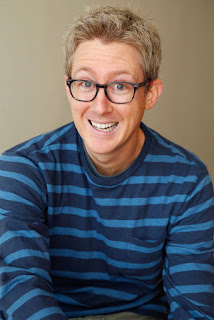 Over the years I've been an actor, musician, musical theatre writer, graphic designer and dad. Now, I'm combining all those experiences into being a writer for children.

After growing up in Missouri, I spent my undergrad years at TCU, then earned an MFA in Dramatic Writing for Musical Theatre from NYU's Tisch School of the Arts. In 2004, I wrote and produced the off-off Broadway musical, THE COSMIC CALAMITIES OF HENRY NOODLE. After that, I sang and played accordion in a Denver-based folk band called the Hobo Nickels.

Around 2009, I had two young kids and was reading lots of picture books to them at bedtime. I grew a love and appreciation for the art form and started writing stories of my own. Along the way, I took children's writing courses, joined the Society of Children's Book Writers and Illustrators (SCBWI), and shared my work with fellow writers in monthly critique group meetings.

My debut picture book, TEENY TINY TRUCKS, came out in 2013. I signed with a literary agent in 2014, and since then I've had the privilege to publish books with Simon & Schuster/Paula Wiseman Books, Scholastic/Orchard Books, and Abrams Appleseed.

As a member of the Society of Children's Book Writers & Illustrators (SCBWI), I served as Assistant Regional Adviser for the San Francisco/South chapter for 5 years. I currently live very happily in San Jose, California with my wife Trudi, kids Nate & Sophie, and our dog Millie.